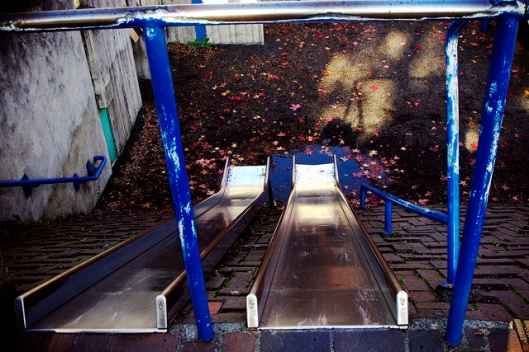 Preschoolers are this fun mix of new and routine. They’re old enough to know snack time, supper time, bath time, bed time; they’re young enough to still be delighted by the newness of a toy, snack, or sight they haven’t yet encountered.

Adulthood, on the other hand, seems rife with resistance to anything new. Or, it’s beleaguered by cynicism. Nothing surprises me anymore, you’ll hear people say. Oh, I know! I know that. I heard that somewhere. That’s what I thought. We already know everything, have seen it all, honey.

Jax says, does, feels, expresses, tastes, hears, sees, or tries something new every day. It’s dizzying—for me. Why isn’t it dizzying for him? Because life is still thrilling. Because he doesn’t have bills or exes or self-doubt or health problems. And generally because he’s a happy person.

I stand guard over his happiness, too. Know that. Despair and insecurity? You shall not effing pass.

Watching him from this defensive sentry position as he interacts with other kids gives me both pride and fear feels. More pride than anything. He’s adventurous. He makes me want to be more adventurous. To try, and try again. 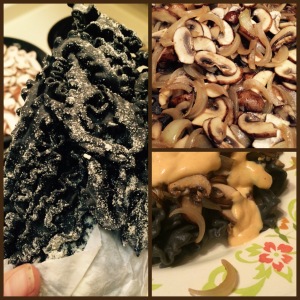 Squid ink pasta, fresh and good as all get out with shrooms, onions, and a creamy garlic sauce.

Jax goes belly down and backwards down the biggest slide at the playground, and I buy squid ink pasta at the farmer’s market.

We went to an open house at a local alpaca farm over the weekend (a first for us both).

I had my first ever parent-teacher conference last week, and the result is that Jax will move to “the big kids’ room” soon. Instead of being the biggest kid in the toddler room, he’ll be the smallest kid (again! It’s the micro-preemie blessing-curse!) in a room of three-, four-, and five-year-olds. His current teachers think he’s more than ready, and I agree. In the big kids’ room, the children are given more autonomy as well as more responsibility. It’s more like regular school. And, none of those kids wear diapers. Jax is not toilet trained yet (though his interest is rapidly growing, and he did get a singing Mickey Mouse potty for his birthday), but his teachers want to work with him on that at daycare if I’ll do the same at home. I believe I said, hell yes. (In daycare. Oops.) My son is smart, curious, and a fast learner. In addition to what I already know about him—that he loves books and singing, is very interested in and good at building/blocks, and always puts his toys away when asked—I learned that my boy is always nice to other kids. I had my mama pride on when I left that conference, because he’s a great kid who his teachers believe will thrive rather than struggle with trying a lot of new things at once.

How can I, as a jaded adult, live up to him?

By being honest about some things I need to change. 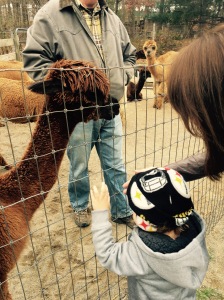 Me and Jax at Terrace Mountain Alpaca Farm.

I need to take better care of myself. I lost my way for a long time and while it might look on the surface as if I’ve made my way back, I have a good bit of healing to do. I exploded my own life to save myself and my son. I’ve built it back up again, in the form of two new jobs, new living situation, new routines, new friends and relationships and acquaintances, and a new perspective on my hometown. Those things aren’t new anymore, though. I’ve settled into them, but the same anxieties and insecurities plague me. I need more “new.” I need to try new and different things and see what works to banish the old demons, and be willing to risk that some of them won’t work at all.

One thing I’ve realized is deeply impacting my daily calm is social media. I’m not here to demonize Facebook (anymore), or to judge those who love digital socializing. Do you. For me, right now, it’s stressful. I need to be honest about that and unplug for a while. You might see fewer blog posts from me, but I’m still here. I have some health issues (physical and emotional) to which I need to attend. Don’t worry. It’s this new thing I’m trying.

Every morning when I wake up now, I drain a full 18 oz. water bottle, and aim for three more throughout the day. I do this because sometimes I forget to drink anything but my morning coffee until it’s so late in the day that to catch up means I’d need to keep Jax’s Mickey potty under my bed (Ew. I’m in a weird mood).

Every night when I go to bed, I make a mental note of the best and funniest things that happened that day, and even the struggles I’ve overcome–a kind of gratitude list I don’t yet commit to paper. I want to commit it to paper. I want to take the time to commit it to paper without feeling like I’m cheating on writing poems, using precious pen time on self-care rather than art-making. Because art is not more sacred than staying alive. See how silly I/we can be?

Every day, I pay attention to my aches, where I carry tension and fatigue in my body, and stretch against them. Much of that tension is years old. Much of it is bone-deep.

Every day, I sit for a few minutes and steady my breath, even if I can’t fully meditate yet. I remember to breathe when I’m anxious. This is huge for me. Think of how kids hold their breath in protest while throwing tantrums. My nervous system throws tantrums when I’m very anxious, and I “forget” to breathe, find myself alternating between holding my breath and gasping. (The meme or t-shirt for me should be “Keep calm and keep calm.”)

Every day, I notice something outside that makes me feel like a natural part of the world, just like any crisping red leaf or meteor or pine cone or cloud shaped like a butternut squash. Every day, I think about stardust and molecules and how everyone and everything is made of the same stuff.

Every day, I look to my son to remember and try to stay inquisitive. How to actually live in the moment, like an innocent.

Squid ink pasta. Alpacas. Cloud-gazing. And once in a while, going belly down and backwards into whatever is at the bottom of the slide.

What new thing have you tried lately?