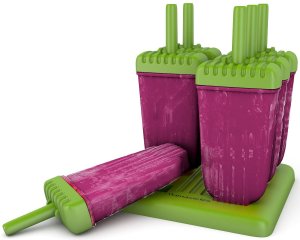 Ordered! “Mamasicles,” but should be called, “There are vegetables in this bwahahahaha.”

I have made inroads into the ongoing struggle to get my kid to eat vegetables, and also demonstrated the kind of persistence and patience worthy of some sort of medal.

Jax used to love veggies. When he was just starting out with teeth, he chased sweet peas around his highchair tray, devoured my spinach quiches, and once sprayed the front of one of my hoodies with mashed carrots because he’d jammed so much into his mouth that I called him a chipmunk and he started laughing.

It all changes once kids taste crappy food.

By “crappy food,” I mean the chicken nugget, french fry, pizza, mac-and-cheese staples of the toddler “diet.” Look, I eat those things (except chicken. Ew.), and I’ve fed those things to my son on many occasions, so I’m not making judgments or blaming my son’s taste for this stuff on anyone. If I was with Jax 24/7/365, in some utopian alternate universe where he didn’t spend a few days a month away from home and we were independently wealthy enough that I didn’t have to work and could also afford organic-free-range everything, Jax would likely never have tasted food accompanied by a Happy Meal toy or a side of ranch dressing. Alas.

So my once veg-loving boy now sees golden arches and his pupils dilate like a shark who smells blood. Vegetables? Pffft. French fries are vegetables, right mom? I imagine him saying some time very soon.

So last night I made him some non-fast-food chicken (still ew, but I love the kid) and sweet potato patties. He ate every bite of the chicken and asked for a popsicle. Popsicles are huge for him right now. So huge I use them as leverage to win arguments with him.

“Happy plate first,” I said seriously, pointing to his sweet potato. (In our house, a happy plate is a clean plate. Half the time when I say “happy plate,” Jax overturns his plate and holds it up triumphantly. Expletive stinker.)

What followed was 30 solid minutes of cajoling him to eat his more-expletive sweet potatoes.

I asked him what color the sweet potatoes were, and in between whines for a popeecle, he said orange. I clapped. He smashed a piece into his chest. I asked him what other things he likes that are orange and he said popeecle (fair enough, I do get the all-fruit ones, and orange is a close second to purple for Jax). I clapped again. I reminded him about cheese and carrots and goldfish crackers–a slippery slope because what if he then asked for those things? He didn’t. Popeecle.

I stayed so calm, you guys. I kept gently reminding him that he needed to at least try the sweet potato–by that point I was sticking with “orange french fries”–before he could have dessert. If he didn’t like it, I was prepared to entice him to eat something in the fruit/veg category: let him feed himself applesauce. Own spoon + mess = toddler happy and a compromise on happy plate. Next I got out the honey. I put a little dab on each piece of sweet potato and urged him to taste it. He wouldn’t. So I said, get some honey on your finger and try it.

He did. Crucial concession on his part, and I capitalized. More honey. He liked it. But he still wouldn’t try a whole bite of sweet potato with honey on it, even if he watched me drizzle.

My last idea was the one that worked. I gave him a little cup of honey and let him stick his finger in it. Then I said, why don’t you dip a bite of french fry? Jax loves dip. He asks for dip at every meal. He dips blueberries in ketchup, sausage in hummus, cookie in ranch–he doesn’t care. Dipping is IT. I got a bite of orange french fry on my fork and handed it to him, and held my breath while he dipped it and put. it. in. his. mouth.

And he ate every bite, and I very nearly wept with relief. I want to say his nutritional needs accounted for all of my relief, but I’d be lying because I really wanted to make the point that 1) you need to taste new things, 2) you need to eat what your mama cooks for supper because she always considers what you like and don’t like, and 3) you will not get popeecles if you don’t eat a vegetable. I clapped and high-five and praised Jax for every single bite of sweet potato, and he even stopped dipping them in honey about halfway through. When they were gone, I gave him an orange popeecle.

Yes, vegetarian police: I occasionally eat shrimp, and that IS crumbled bacon. Better than a Happy Meal, and it was delectable.

Related: I made a slammin shrimp and corn chowder earlier in the week (Jax-approved), and Amazon Prime-d some molds to make homemade popsicles that will be chock full of pureed fruits and veggies.

I will win this battle against the fast food industry. I will win it with mom-of-the-year-level patience and creativity.

And your suggestions, if you got em.