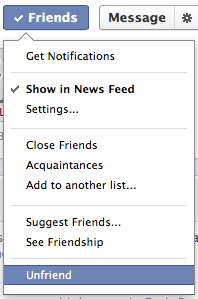 I un-friended someone on Facebook over a racist and uncompassionate response to the grand jury’s decision not to indict Darren Wilson, and it’s really bothering me.

It is NOT bothering me because I want more hate with my social media, or am now thinking some conciliatory nonsense like, “Well, he’s entitled to his opinion…” He, of course, is. His opinion is wrong. His opinion is wrong because it is cruelly dismissive of the experiences and hardships of other people who enjoy fewer privileges than he does. His opinion made me feel intense, negative things. I’m allowed to block him so that I don’t have to feel those things. Still. I’m not 17; un-friending feels like a childish weapon. It made me feel icky to do it. It made me feel icky to have spouted off on his thread before I did it, too; I believe we should all shit in our own yards, knowwhatI’msayin? Pretty sure I even shame-on-you-ed him. I’m not perfect.

I am often accused of not listening to those whose opinions differ from mine. It isn’t that, at least not most days. I make a conscious effort to be a good listener–because I believe that’s the right thing to do, and because, when I have something to say, I hope people will listen to me. I listen to people I don’t YET agree with every day. I constantly rethink things and change my mind. It’s just that I like original thought, and much of what people speak against me about is just some rewording of every bit of white privilege (or class privilege, or rape apologism, or victim-blaming, or homophobia) I’ve ever heard before.

Have an original, or at least a credibly sourced, thought, and I will listen and engage.

Spew gossip, hearsay, Fox News sound bites, buzz words, or quotes or details taken out of context, and I will argue with you, and if you are cruel and defend criminals, I will get tired of arguing with the immovable rock of your cruelty and un-friend you. I am too tired, most days, to try to change the world.

Still, one of the amazing things that can come out of a contentious comment thread or Twitter feed is the unintended social experiment that lays bare institutional prejudices for all to see. Sometimes I participate in these threads, and sometimes I don’t. Sometimes I start them. It isn’t trenches activism, but it often spawns or fuels it. I jump into threads begun by writers and activists I admire. I sit back and read threads 350 comments deep, without typing a word.

I think. I read, and I think, and sometimes I write. That’s what I have in me right now, at this point in my life.

I think what a lot of people don’t realize, when they mouth off from a place of no compassion, is that what they’re saying is visible to a whole slew of people who need compassion. Who have been abused, or raped, or had a loved one murdered by a cop. Who have kids and are terrified to let them leave the house. A whole slew of hurting people are triggered every day by headlines, and now (always, really, but so much now), by their own social media feeds.

If you are siding with oppressors and criminals, you are wrong. You have got it wrong. And when you, however seemingly “innocently,” insert a victim-blaming detail (“The cop was pursuing that kid because he stole a pack of cigarettes!” or “If she was really raped, why didn’t she report it to police?”) into a conversation full of compassion and refuse to acknowledge how that derails and distracts from said compassion, you are wrong. You need to know that, whether you intend it or not, your lack of compassion can hurt people, which, in a way that’s very real for victims everywhere, makes you complicit in that oppression and those crimes. It isn’t a matter of you and I “thinking differently.” It would be nice if that’s all it were. It’s a matter of you thinking it’s acceptable to be mean to or about people you don’t know, and my disagreeing with what must be your gross underestimation of the reach of your meanness.

If you can’t care about a rich football player’s wife, or an up-and-coming actress duped into believing a TV superstar wants to help her career, or murdered children who don’t look like you or live where you live, then surely you could at least try to care about the people you’re “friends” with on Facebook.

And if you are seeming not to, then I can’t be one of those “friends” anymore. Please read this and this and if you’re still angry with me, we probably aren’t really friends outside of Facebook, either. I wish you well.